Family reunites with sister after 12 years 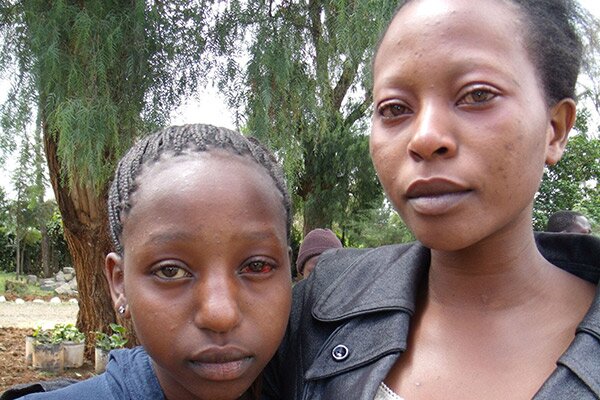 A family in Makueni County got an early Christmas gift when they were reunited with a sister who had been lost for 12 years.

After years of agony associated with the search for a missing child, Ms Anastasia Mukiti traced her sister Mary Wanza, 17, to Nanyuki Children’s Home where she was known as Jessica Wanza.

Ms Mukiti, who is a college student, will never forget that day in July when a call came through her mobile phone from her cousin in Mombasa saying she had spotted Wanza’s photo in the previous day’s Daily Nation.

“I had the newspaper in my house but I had not seen it. I was able to pick Wanza from the photos of lost children because she resembles my brothers,” Ms Mukiti said.

The photos of the missing children had been placed by the Child Welfare Society of Kenya. So Ms Mukiti contacted the organisation and one thing had led to another.

Ms Margaret Kwamboka in charge of the organisation’s rescue and re-integration said they carried out a DNA test to ascertain that Ms Mukiti’s claim to Wanza was genuine.

“We are normally very glad whenever we manage to reunite lost children with their biological families. But we still go a long way in verifying if the claim is genuine. For Wanza’s case we did a DNA and it was positive,” the officer said.

Ms Kwamboka said Wanza was taken to one of their children’s homes by a Good Samaritan who had picked her after she lost her way home from nursery school in the sprawling Kibera slums.

On Friday, tears flowed freely when Ms Mukiti and her uncle Mr Bernard Munuve were driven to Nanyuki where they reunited with Wanza for the first time in 12 years. The uncle and her two nieces were locked in an emotional embrace for a long time as tears flowed uncontrollably.

Since positively identifying Wanza in the newspaper photo, the family had been raising funds from villagers in Kibwezi to enable them travel to Nanyuki for the reunion.

According to Ms Mukiti, her little sister got lost in 2001 when she was going home from nursery school. She was only five years old. Their mother was not at home and had left the responsibility of picking the child from school was left to her younger brother who was in standard three.

“When I arrived home from school in the evening, I didn’t find my mum home and a neighbour informed me that she had gone to search for my little sister. We did not sleep at all that night because it was very traumatising,” recalled Ms Mukiti.

As the search in children’s homes, hospitals and mortuaries went on for weeks, the family relocated to their uncle’s home in Kibwezi but the mother remained in Nairobi to continue with the search.

Unfortunately, she died two years later leaving the responsibility to bring up the children to Ms Mukiti, who is her eldest daughter, and her brother Mr Munuve.

“The death of my sister placed a very big responsibility on me in particular. I had to take care of her five children in addition to seven that are mine,” Mr Munuve said.

Ms Kwamboka said Wanza and her family will undergo counselling as part of the integration process.